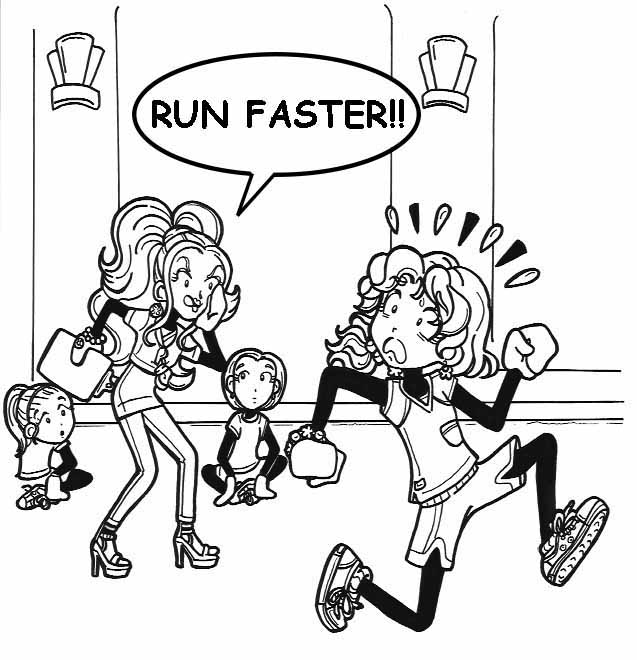 Seriously!!! Yesterday I was THIS CLOSE to begging my mom to homeschool me, but then I remembered that I’d rather poke myself in the eye with a spork then hang out with just my mom all day!

Why am I so mad about school right now?

It’s that Miss Hollister substitute teacher I told you about. I still have no idea exactly how she’s related to MacKenzie. I just know they ARE related, and they’re BOTH out to get me!

After that one day when she subbed for my math class I didn’t see her for a while. (I was SO glad all my teachers stayed healthy and didn’t have jury duty or anything!)

Then yesterday my gym teacher was out, so Miss Hollister was there again.

This is what I don’t get…what makes her qualified to be both a math substitute AND a gym substitute? Is she just this super well-rounded high school graduate who’s both REALLY good with numbers AND super athletic?

And get this…she wore HIGH HEELS in gym.

Now, I HIGHLY DOUBT colleges will be throwing sports scholarships at me four years from now, but I know a few things about being physically active, and the first is that it’s SUPER HARD to run when you’re wearing Jimmy Choo stilettos!

As soon as I got to class and saw her sitting there, popping gum like an obnoxious CCP, I got that oh-no-I-want-to-hurl feeling.

In case you don’t remember, she gave me a week of detention for “looking at MacKenzie in the wrong way.”

(It ended up being only one day. I complained to Principal Winston and he said, “I trust Miss Hollister had her reasons, but as a substitute she’s not yet familiar with our usual disciplinary procedures blah blah blah…translation: “She was WAY harsh, so just do a day, and it’s all good.”)

Anyways, when I saw her, I immediately started running toward the locker room, where I planned to hide out sketching for the entire class.

But she saw me after only a few seconds and screeched, “Miss Maxwell! How’s everything going in math?”

So I said, “How’s everything going in math? Um, horribly! I stink at it and now I have post-traumatic stress disorder from the blackboard HUMILIATION you put me through!”

Except I said it in my head so no one heard it but me. What I REALLY said was, “Um, good. Bye.”

Then I turned around and started speed walking to the locker room. I knew I couldn’t hide out in there after she singled me out. She OBVIOUSLY knew I was there.

After I got changed, I told myself not to freak out or anything. It was just gym. What was the worst that could happen?

I’ll tell you the worst that could happen! Miss Hollister decided to have us do laps…alone! As in one person at a time running around the gym while EVERYONE ELSE watched!

And she had ME go first. What’s worse, she kept yelling, “Faster! Pick up the pace! You’re not even getting your heart rate up!”

Then after I finished, she said, “Man, this computer generation. It worries me to see so many young people in such HORRIBLE shape these days!”

What kind of cruel, sadistic person makes kids run ALONE in front of an audience and then pretty much calls them fat and lazy??

After that, I decided to pretend I was sick so I could go to the nurse’s office. I wasn’t TOTALLY lying. I was sick…sick of her!!!