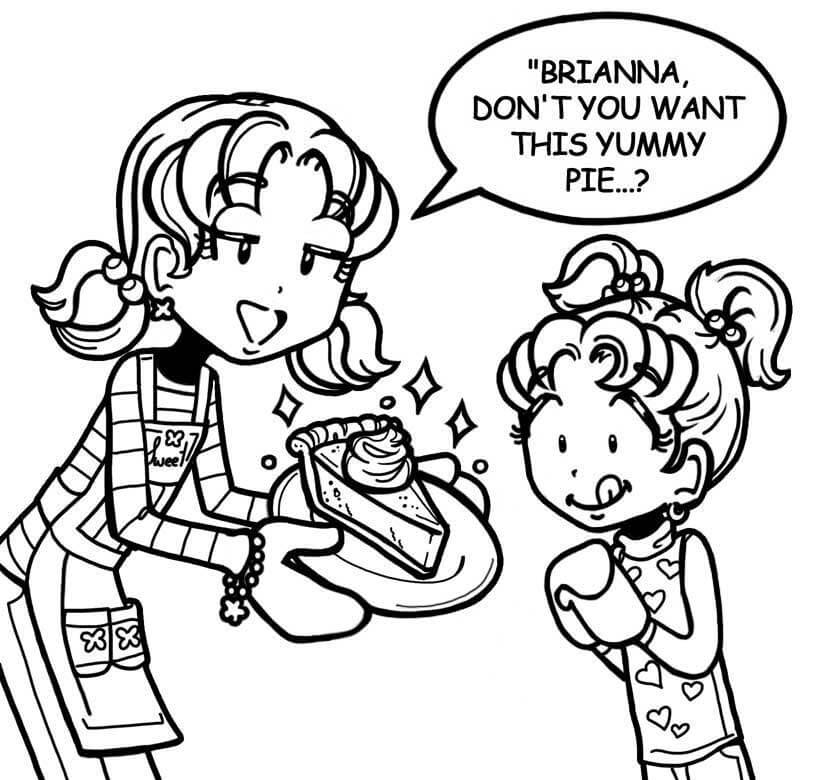 I’m the smartest person in the whole wide world!

I know it’s not cool to brag, but seriously, I came up with a TOTALLY clever plan to save my Halloween party.

As you may remember, Brianna FLIPPED OUT when we were carving pumpkins together, and then she went crying to my mom, saying that I was mean to her.

Then, giving me the worst form of punishment in the history of bratty little sisters, my mom told me I’d have to take her trick or treating.

(Brianna, not my mom…she’s more the “stay home and annoy trick or treaters with raisins” type than the “need someone to take her door to door” type!)

I was DEVASTATED when I heard those words because I was really looking forward to hosting my Halloween party with Brandon.

Hosting a party together would be a MAJOR milestone in our relationship. It’s like telling all our guests, “Look at us! We’re no longer Nikki. And. Brandon. We’re now Nikki-and-Brandon, an official two-part unit!”

On Tuesday night, after spending a good couple of hours trying to figure out ways to save the party, I decided to make some pumpkin pie. (I do some of my best thinking when the air smells like dessert.)

Just as I was about to put the first bite in my mouth, Brianna ran in screaming, “I want pie!”

But she had already eaten dessert, and A LOT of it. After dinner, mom had given her four cookies, but then when she went to the bathroom, Brianna ate TEN more. TEN!

When my mom came back, she was totally annoyed. With Brianna’s CRAZY, bounce-off-the-walls kid energy, the last thing she needed was a pound of sugar.

Mom actually told her “No dessert for two days!” And I’m sure you know how that played out.

When I saw Brianna licking her lips, begging me for pie, I knew EXACTLY what to do.

I said, “Hmmm, this pie is SO good! It’s super buttery and delicious. What’s that? You want some?”

Then she said, “Pie!” (Because she was too busy DROOLING to formulate any other words!)

And then I said, “I’d love to share this with you, but what about what Mom said? I’d hate to get you in trouble. I mean, what kind of sister would I be if I did that?”

I know…I was being ALL KINDS of manipulative!

After that, she whispered, “Sorry Nikki.”

So I said, “What’s that? I didn’t hear what you said. Could you speak up?”

And again she said, “Sorry about getting you in trouble! I REALLY want pie! Don’t tell?”

And that, right there, is when I saved my Halloween party with eight little words: “You want pie? Then tell Mom the truth.”

And this, right here, is one of the many reasons to appreciate an unformed six-year-old brain.

With my superior fourteen-year-old reasoning skills, I’d know that telling the FULL story about the whole pumpkin mess (how she had a tantrum and almost made me stab myself in the eye with a little carving knife) was SO not worth a piece of pie.

But Brianna would probably trade an organ for a brownie…so she said, “Deal!”

Without even flinching, she ran into my mom’s room and explained that I didn’t say I hated hanging out with her…I was just upset when she spazzed out because I couldn’t carve Princess Sugar Plum.

Just as I was about to eat my last bite of pie, my mom walked in and said, “Hey there, champ.” (No, cleaning my plate didn’t somehow become a victory worthy of the name “champ”…I’m pretty sure that was the guilt talking.)

Then she added, “Brianna told me everything. Sorry for not believing you. Your party’s a-go for Halloween!”

So in a matter of an hour, I got TWO apologies, permission to throw my party…AND an awesome pie. (I wasn’t kidding before…it really was buttery and delicious!)

Okay, so I may have exaggerated…I’m probably not the smartest person in the world, but right now I’m the happiest!