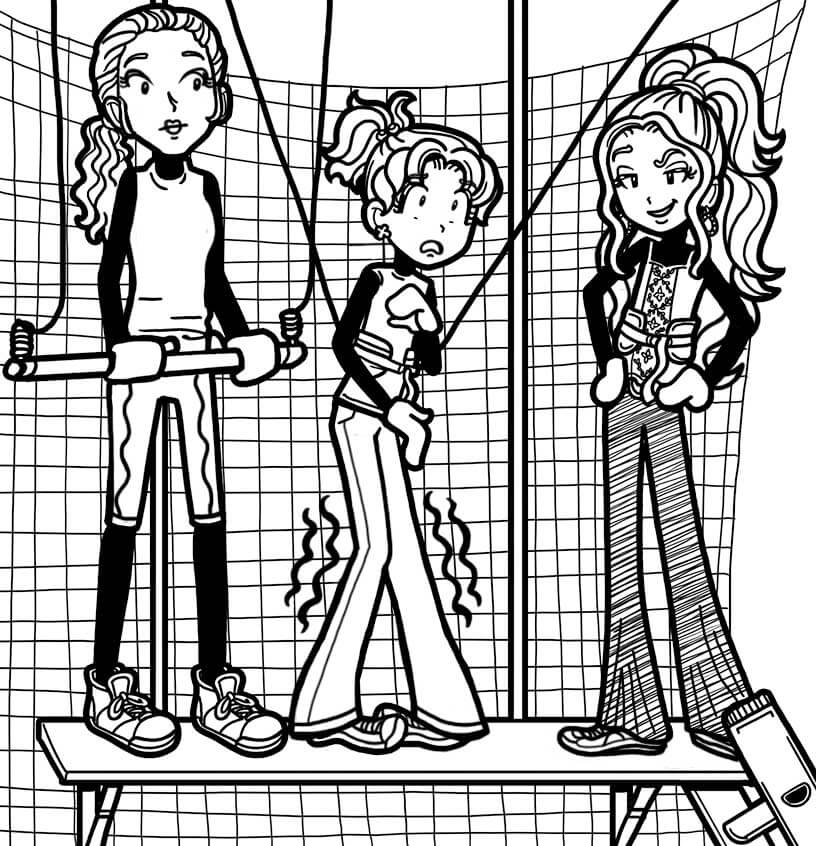 I know you’re probably all DYING to know what happened last weekend at the trapeze class. Sorry for leaving you hanging!

If you missed that post or you forgot what went down, read this. Don’t worry…we’ll wait for you!

OK, done? Good! So, I smelled a nauseatingly overpowering perfume from down below RIGHT as I heard MacKenzie shout, “Don’t fall, dork!” This, of course, REALLY meant, “I hope you fall, dork, and I can’t wait to record it and put it on YouTube!”

My heart started racing like a freight train, and my stomach started making those really gross noises, which usually means I need to find a bathroom, and fast!

But I was all harnessed in, and I thought if I asked the woman to unharness me so I could run to the girl’s room, everyone would think I was chickening out!

I closed my eyes and told myself, “Stop worrying. Just let go! No, not that way! Hold it in, but then let go. Of the bar…not your bladder or bowels!”

This super confusing inner pep talk made me even more nervous, and I realized I couldn’t hold it anymore!

As the woman unharnessed me, MacKenzie shouted, “It’s about time! You’re holding up the line!” Then as soon as I climbed down, she started to climb up.

Chloe put her hand on my shoulder and said, “Don’t feel bad, Nikki. You don’t have to do it!”

Then Zoey said, “Yeah, we know you’re scared of heights. We’re proud that you even went up there!”

Of course, MacKenzie was a huge show off, and a total trapeze hog! She was STILL swinging around when I got back from the bathroom!

Even though I’d rather eat a bowl of my own hair in tomato sauce than spend any more time around her than I have to, I was kind of glad she hadn’t already left.

There was NO WAY I was going to let her leave thinking she was awesome and I was a big fat quitter!

Within seconds, I was back up on that platform, getting harnessed in.

This was really it! I was going to do it! It felt like that big scene at the end of every movie when it’s the star’s big chance to shine. This was MY moment, and no cold-hearted CCP could take it away from me!

From that point forward, everything went in slow motion. I saw MacKenzie rolling her eyes at me, Chloe and Zoey jumping up and down cheering for me, and the woman who harnessed me in talking to me, telling me some kind of rules.

And then it was time to go, but I had NO idea what that woman had said! I SERIOUSLY wished I’d actually paid attention instead of getting all caught up in my movie fantasy!

I took a deep breath and then jumped, and even though I felt super scared before, I felt totally free!

Down below, Chloe and Zoey were yelling, “Way to go, Nikki! You did it!”

I was SO proud of myself! Since I was feeling super confident, I decided on my next swing to attempt to hang from my legs, like I’d seen some other girls do.

But I guess I was a little too ambitious, because I messed up and fell down to the net!

I thought FOR SURE I’d see MacKenzie standing right in front of me, filming on her iPhone.

But when I looked up, she was gone. After I got out of the net, Chloe told me, “As soon as you jumped, she huffed and stormed out!”

If she had stayed just a LITTLE longer, she would have gotten her wish and seen me fall! But you know what? I don’t even care that I messed up. The important thing is that I jumped. Squeeee! It was the best day ever!