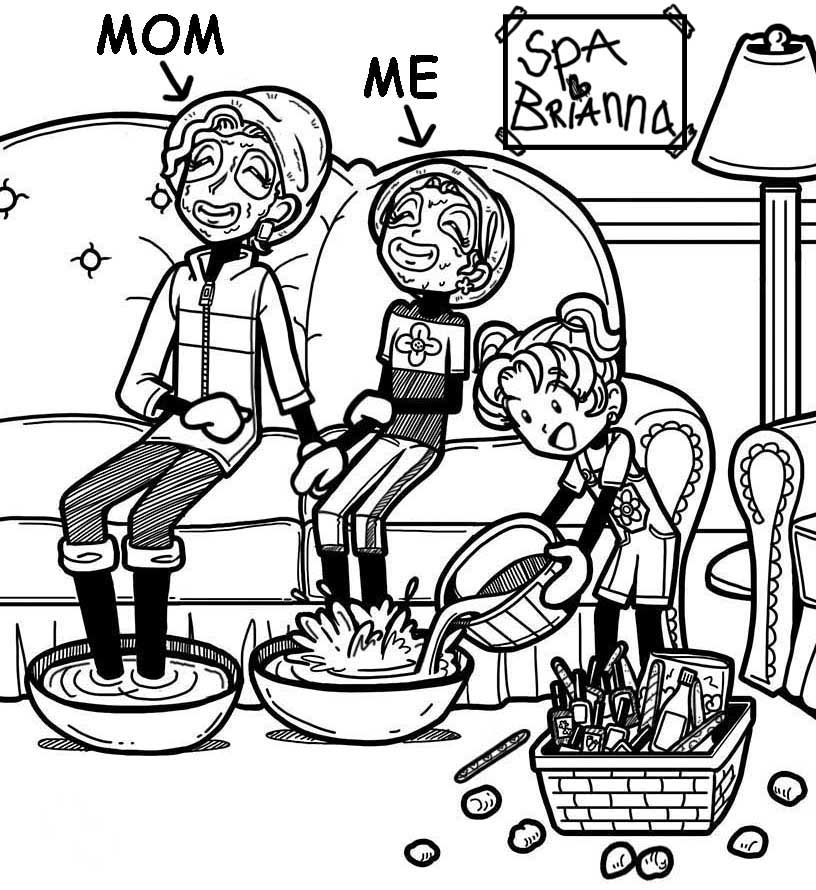 As you might remember from my post last week, I wanted to do something super nice for my mom to show her I appreciate her.

Thanks so much for all your comments! Based on your advice, I decided to go with a mother/daughter spa day.

Since I had $7, a piece of lint, and a wad of tissue-wrapped gum in my pocket, I couldn’t afford to take her to a real spa…so I did the next best thing: I created my OWN spa right in our house!

That’s right, I turned our living room into “Maxwell’s Magical Escape,” a place for massages, manicures, pedicures, and other relaxing stuff.

I considered learning how to do these things myself by watching YouTube videos, since you can learn how to do ANYTHING on YouTube (even totally weird and random things, like how to carve tiny designs into egg shells and how to win a mooing contest.)

But since I wanted to get spa treatments too, this seemed like a bad idea. (And even though I appreciate my mom, I would rather put my own foot in my mouth, after a long, sweaty gym class, than spend a half hour touching hers!)

So I decided to do two things: borrow these two awesome neck massager thingies from Zoey’s dad, and hire Brianna to do our nails and toes!

And I had a feeling she wouldn’t want the lint or used gum, so I decided to make a trade. I offered a one-hour play date for Miss Penelope in exchange for three hours of doing stuff for Mom and me.

Brianna’s always saying, “Miss Penelope is SO lonely! She REALLY needs a friend to hang out with! Hands are people too!”

So I figured I’d turn MY hand into Miss Alberta and spend an hour feeling like a total weirdo while Brianna’s hand “hung out” with mine.

Then I made her watch those YouTube videos and practice on her own hands and toes before trying ours.

The beginning of our mother/daughter day went GREAT! I put on some super soothing music I found online, and we laid back in the reclining chairs in our living room with our feet soaking in hot water, while using the massagers on our necks.

After about 15 minutes, Brianna came in and whisper-yelled, “Want a hot towel for your face!?!”

I told her that people talk quietly in spas, but asking her to be quiet is like asking bacon to stop tasting so awesome. It ain’t gonna happen!

About 10 minutes later, Brianna came in carrying a caddy I put together earlier with nail stuff.

It had a nail file, a buffer, nail polish remover, some cotton balls, and a ton of different nail polish colors for us to choose from.

She was wearing this little apron I made her using an old T-shirt with “Maxwell’s Magical Escape” painted on the front.

My mom thought that was the cutest thing! And she said, “Wow, what a treat! I bet this will be the BEST pedicure I’ve ever received!”

Clearly, that was an EPIC exaggeration, since a trained monkey could probably do a better job than Brianna.

But it could have at least been decent if she hadn’t IMMEDIATELY dumped the entire bottle of nail polish remover on my mom’s left foot…where she had a big old blister!

I guess none of those YouTube videos explained how to use that stuff!

Luckily, the rest of the pedicure wasn’t that bad. Our feet ended up looking like the pictures in Brianna’s coloring books…meaning there was more polish on our skin than “inside the lines.”

But my mom seemed to really love that the three of us got to hang out and have fun together.

I’m SO happy with how it all worked out. I wanted to make her feel good, and it was a huge success! 🙂