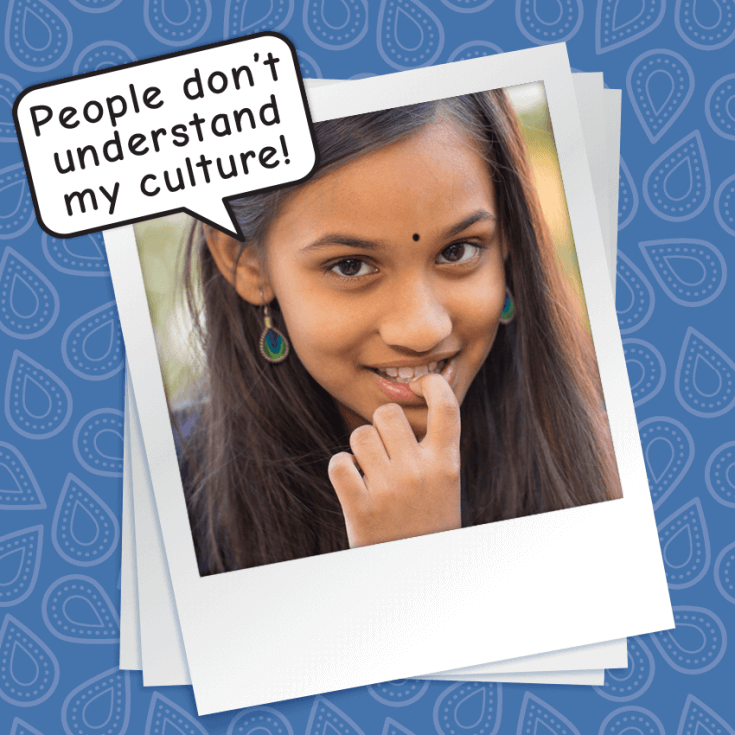 Hey Brandon! I met these girls at school and we hit it off pretty well. But then I started wearing this small dot on my forehead that’s called a “bindi.” It’s an Indian tradition. So, last week these girls came over to my house and started saying all this rude stuff about my bindi, like “Does that thingy hurt?” or “That’s sooo weird!” It made me SO mad! What do I do about people who don’t understand my culture, and is there anybody out there who gets it?

Yeah, that does sound pretty rude. I’d even say insensitive, if you ask me.

I might not be the best person to answer this. I think it would be super helpful to talk to someone who can identify with what you’re going through, someone who knows what it’s like to wear a bindi in the US.

But since you asked me, I’ll give it my best shot!

Depending where you live (like if you live in a small town that’s not very diverse, instead of a big city with a diverse population), your friends might not have ever seen someone with a bindi before.

Now, just because they’ve never seen one before doesn’t give them the right to be all rude about it, and you shouldn’t have to be the one to educate them.

But if you’re willing, I guess a brief explanation that it’s part of your culture and it’s totally normal to you would probably help. If people are really pushy and rude, I think it’s okay to say, “Look, I think that’s rude and you should stop making such a big deal about it.”

I think the madder you get, and the more you make a big deal out of it, the more of an issue it will become. That’s not right. But I think the calmer you can be about it, the better.

My grandma’s always quoting this writer lady named Maya Angelou who said, “When you know better, you do better.”

So if it starts going down a weird road with your friends, I think you should take a deep breath and remind yourself that they don’t know better. Yet. But if they learn from you about what a bindi is and why you wear it, then maybe next time, they won’t be rude about it.

You asked me if there are any people out there who won’t be rude about your culture. I’d say look for people who realize that you’re Indian and respect you for it. They may have already noticed the unique customs your family has. Or maybe your mom wears a bindi, and they’ve seen that. So hopefully they’ll be nicer than the people who were rude to you.

You could even mention the bindi yourself, if you want to get it out of the way. Like, “Hey, check it out. I started wearing a bindi. It’s an Indian tradition. You can look it up if you want to know more.” But, I realize how exhausting it must be to explain your culture all the time. So only mention it if you want to.

Hopefully people will get the hint that you’re not going to give a four-hour seminar on the significance of the bindi! 🙂