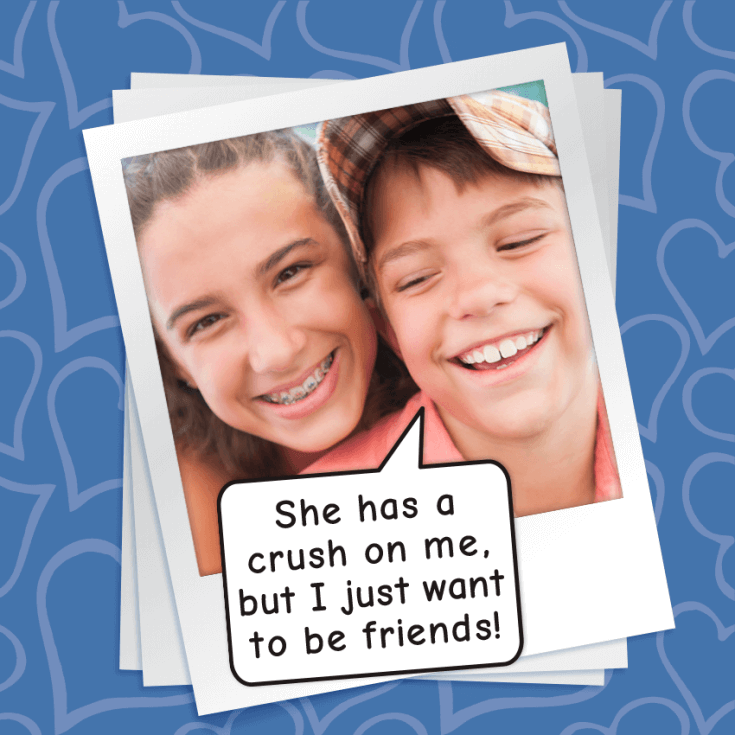 The other day I found out my friend had a crush on me. Since I didn’t really feel the same way about her, I kind of ignored the whole crush thing. Then she asked me out and I thought we were too young to date, so I said no. She cried and called me mean names. She won’t talk to me anymore, but I still want to be her friend. And now the whole school thinks I’m a heartbreaker. Any advice on how to clear things up and get my friend back?

Yet Another Crush Catastrophe

Hey Yet Another Crush Catastrophe,

Oh man, this sounds like a tough situation! For you AND for her! And then to have everyone in school talking about it…

Okay, so I think the first thing to do is think about how she’s feeling right now. I mean, if you’ve ever told someone you like them, you know it takes a LOT of guts. You have to seriously put yourself out there. And I’m sure she thought about how complicated it would be, since you guys are friends and I’m sure she didn’t want to mess up your friendship either. So she must have felt kind of strongly to go ahead and tell you. Because bottling up feelings like that is also really hard!

So, when you admitted that you didn’t feel the same way – and I TOTALLY support your honesty, I’m just asking you to walk in her shoes for a sec – that must have hurt a LOT.  It sounds like she was kind of in denial when you first responded, so she asked you out. And when you turned her down again, that’s when reality sunk in. And it hurt all over again, but even worse, probably.

So she vented to some friends, and now the whole school knows (or it feels like that, anyway).

If you haven’t already, I think you should let her know your friendship matters to you, and you’re really sorry if her feelings got hurt. Write her a note if she won’t talk to you. But then I think you need to give her some space.

When you get rejected by a crush, it feels like the end of the world. It really does. And it’s really, really hard. But the truth is, time helps. Hopefully she won’t hold a grudge against you. But if she does, the pain will probably fade with time, she’ll miss being your friend, and you guys will make your way back to the way things used to be (or something similar anyway).

And things are MOST likely to settle down eventually if you keep your cool right now. Don’t explode at her or tell her she’s being unfair or overdramatic. Just be clear that you’re her friend and you’ll be there when she’s ready and then give her that space I mentioned.

Have you ever had a crush on a friend or had a friend crushing on you? How did you handle that? Did the friendship survive? Tell us in the comments!