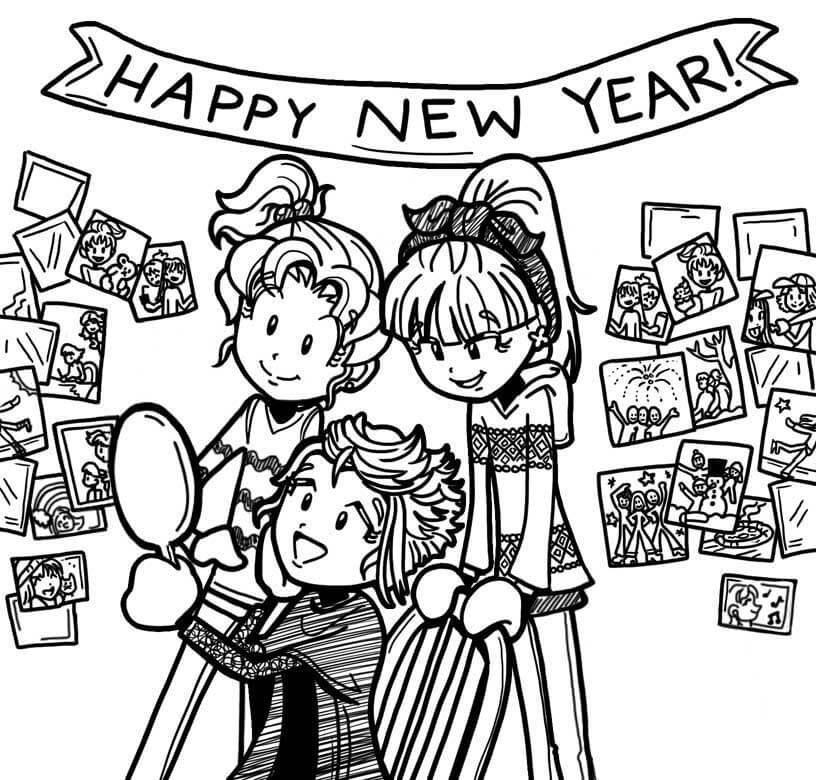 I can’t believe I made it a WHOLE week into 2014 without telling you guys all about my annual New Year’s Eve sleepover!!

As you may remember from last week’s post, it almost didn’t happen because my mom wanted me to babysit Brianna.

But I had a whole list of things I’d rather do, like: read the Wikipedia page for pickles, write a 20-page paper on fertilizer, and watch grass grow.

Luckily, my dad’s back was killing him so he stayed home, meaning I could have my sleepover, as planned. (NOT luckily for him. I’m not that heartless and sadistic…you know what I mean!)

I’m sure you’re dying to know what happened. And I’m dying to tell you, so here goes!

The night started AWESOME! Right before Chloe and Zoey arrived, I put up a ton of pictures of us from 2013.

They were so psyched to walk in and see all of the fun stuff we did throughout the year!

The first thing we did was watch our favorite movie from 2013…Teen Beach Movie!

Then after that, we listened to a ton of our favorite songs from 2013, including “Roar” by Katy Perry, “Come and Get It” by Selena Gomez, and “We Can’t Stop” by Miley Cyrus.

The best thing: I ended up at the same 4th of July party as Brandon, even though he was away at photography camp, and we got to watch the fireworks sitting super close together!

The most embarrassing thing: My mom barged into my homeroom to give me the lame pink elephant backpack she bought me that I “forgot” at home.

The thing I wish happened: I wish I got to be part of Chloe and Zoey’s best thing. (See below!)

The best thing: She got to go to a special Taylor Swift concert with Zoey. (And I missed it because my phone was on vibrate…and, well, I was hanging out with Brandon so I didn’t think to check it!)

The most embarrassing thing: A bird pooped on her head outside the mall, right in front of her crush, Marcus!

The thing she wish happened: She wished Marcus asked her out after the Sweetheart Dance. (Maybe it will happen in 2014!)

The best thing: Same as Chloe’s.

The most embarrassing thing: She walked down the hallway with toilet paper sticking out of her skirt…on the ONE day she wore one!

The thing she wish happened: She wished she cut her hair into a pixie cut, like Jennifer Lawrence from The Hunger Games, when her mom suggested it over the summer.

Since I couldn’t go back and make it to the Taylor Swift concert, and Chloe couldn’t get Marcus to ask her out several months ago, we decided to focus on the one thing we COULD make happen: Zoey’s hair wish!

I knew my mom had hairdresser scissors (because she used to give me HORRIBLE home haircuts using a bowl to trim my ridiculous-looking bangs). And we found this YouTube video with a tutorial for cutting a pixie haircut.

So I sat her down in my kitchen, chopped off all her hair, and now she looks totally awesome!

Okay, so that didn’t happen. I would NEVER try to cut someone else’s hair! Unlike my mom, I know that the only hair I should ever cut belongs to a blond plastic doll that’s 11.5 inches tall!

As luck would have it, I actually had a long blond wig from when I dressed up as Barbie one Halloween, so we decided to chop that into a pixie cut to see how it would look on Zoey.

I know…it wasn’t QUITE the same, but now she can decide if she should do it for real! What do you think? Should she chop off all her hair??

And more importantly, what did YOU do for New Year’s Eve??